Tangled Vines: Greed, Murder, Obsession, and an Arsonist in the Vineyards of California 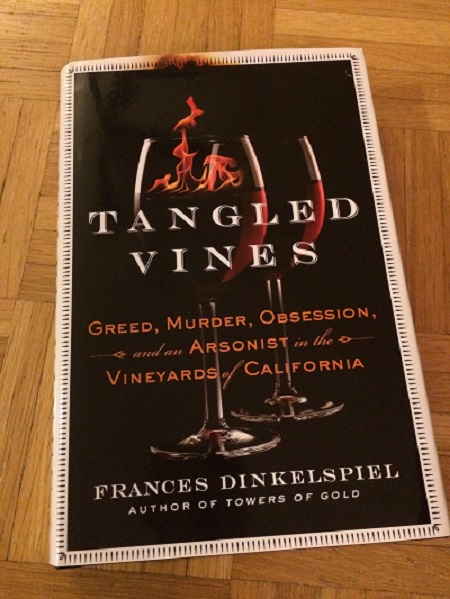 Intertwining the history of her family’s foray into winemaking with the story of a wine lover turned arsonist who destroyed millions of bottles of California wine, makes for a unique telling of two interesting tales. Author Frances Dinkelspiel sets out to explain the inexplicable: why con man Mark Anderson set fire to a California wine storage facility – sending more than four million bottles up in smoke – and how her family’s wine, some of which burned in the fire, came to exist at all.

It was Anderson’s story that truly interested me when I picked up this book. But it alone would have made for a fairly short read. Anderson was an obvious suspect in the fire case and his slippery sense of the truth makes his motivations a bit murky (for the record, he says he didn’t do it, though the facts of the case make that a hard claim to swallow). Weaving in the complex history of the  wine that the author’s family lost in the fire makes for a stronger tale – one that tells a little known story about the birth of California winemaking, the struggles of those who sought to cultivate the land and how wine is often at the centre of great family tales.

The history of Dinkelspiel’s  family wine is a sad one, full of murder and strife, but also one that showcases perseverance and dedication. She follows the history of the families who began winemaking at a vineyard in Rancho Cucamonga, where her great-great-grandfather, Isaias Hellman, made the wine she now wants to understand. These early settlers saw the potential for successful winemaking in the state, but circumstances meant they could never fully bring their vineyard dreams to fruition. While there was early success, the aforementioned murder and strife meant that the estate’s time as a working vineyard was tumultuous and short-lived.

The book isn’t told in chronological order, which I admit was a bit distracting for me. However, I think Dinkelspiel did a good job of taking two very different stories and finding the common threads. I found this to be an enjoyable read and I think it would appeal to others like me who are fascinated by both wine history and wine-related crime.

Have you read Tangled Vines? Share your thoughts in the comments or on social!

*I received a review copy of this book, but all opinions are my own.