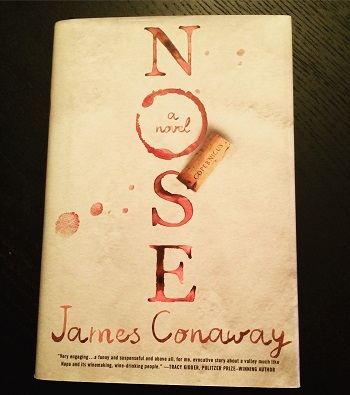 I recently finished another novel set in the wine world, as I play catch-up on my backlog of wine reading. Nose is a novel by wine critic James Conaway that has been sitting on my shelf for about a year. It tells the story of a mystery wine that blows away a pompous, old school wine critic and leads him on a quest to find out who made this incredible wine.

The story starts out with wine critic Clyde Craven-Jones, but CJ is far from the only character whose perspective is shared—there’s Les, a young journalist turned wine obsessive and makeshift PI, Claire, CJ’s long-suffering wife, Sara, a medical technician and the daughter of a California wine scion struggling under debt, Cotton, an environmentally conscious winemaker devastated by the loss of his great love and seething over the role of Sara’s father in that tragedy and Sam, the owner of Glass Works, the wine bar where everything comes together at some point or another.

All these characters (and a few others of less import) weave in and out of the narrative, as we piece together the complex story of this wine and the people in its orbit. There’s also Nose, the gossipy wine blog that bedevils CJ (an old school wine critic annoyed by a blogger – that would never happen, right?), as his own publication struggles.

There’s a lot going on in this book. I might argue that there’s actually way too much going on, since I often found myself losing the plot threads. But I would say the biggest flaw with this book is that you stay with the characters for such a short time that you don’t really understand (or even like) them. Les seems like the central character, and is something of an anti-hero, but I found myself mostly confused and annoyed by his behaviour. C.J. flits back and forth between pompous fop and misunderstood genius and Claire, who is the most likable character in the beginning, drifts off in a very weird direction by the end.

The mystery of the wine isn’t terribly mysterious (it’s fairly obvious where this part of the plot is going from early on), but there were a few surprising twists and turns along the way. Conaway clearly knows and understands the California wine industry and I suspect some of the characters are based on the people he’s met along the way. Unlike real life, though, sometimes it’s better to try and tell the story from fewer perspectives to have the most impact.

I have a few more Conaway books on my list for 2016 and I’m excited to see how I feel about his non-fiction. Novels are a personal thing, so I’d be interested in hearing from others who have read Nose and their thoughts on the book! Share your reviews of Nose in the comments or on social.

The Best Beer in the World: One Man’s Global Search for the Perfect Pint

The Wineries of Ontario’s Southwest