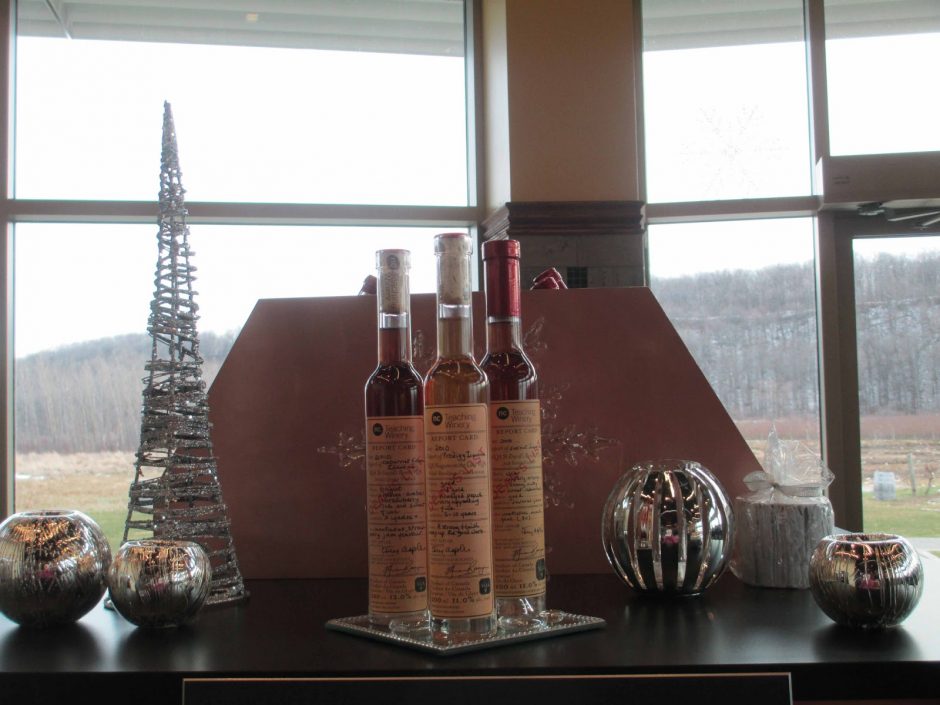 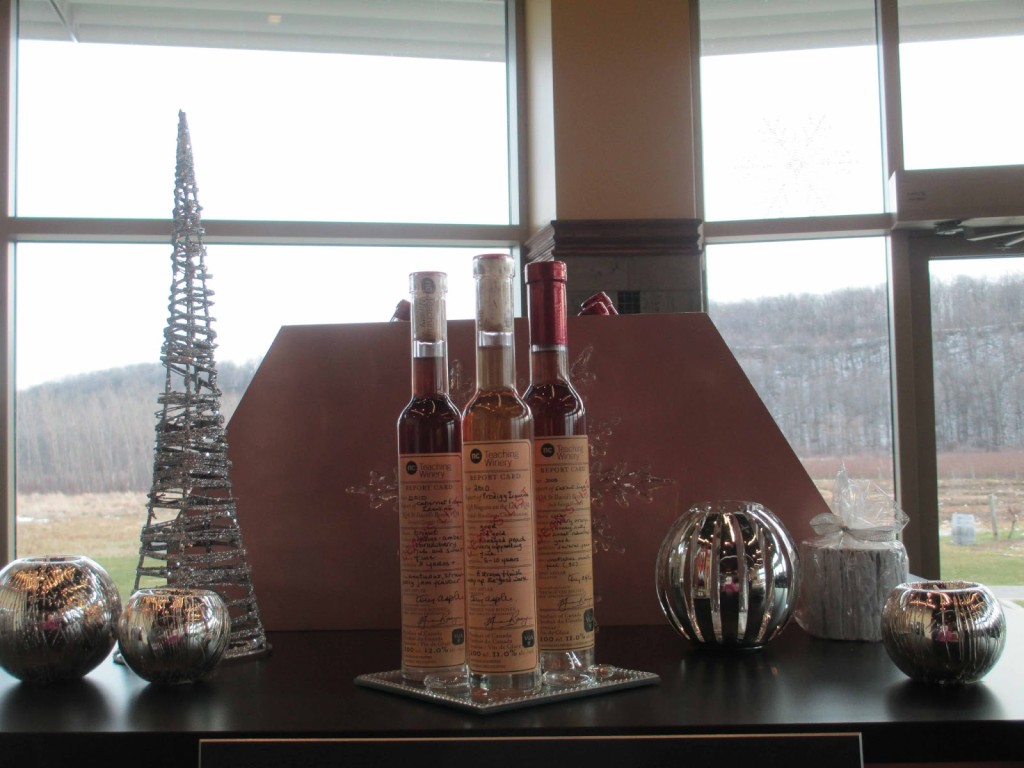 When my wonderful Twitter friend Jason (@cono_sur) invited
me to join his tasting group on a Niagara Icewine Festival
adventure, I jumped at the opportunity. I’ve never attended the Icewine Festival, but it sounded like a fun way to sample some of the areas best
selections.

Icewine is an interesting drink for me. I like it, but I
find that when we buy it we rarely drink it. Opening a bottle seems a bit silly
when we almost never get through it. You have a little drink and then you’re
good. The bottle inevitably sits open in the fridge way longer than it should
and I feel guilty for spending so much money on something I don’t finish. This trip was a great option, as it allowed me to experience some fabulous Icewines without having to buy a whole bottle. Don’t worry, we bought plenty of non-Icewine at the wineries to make up for it! 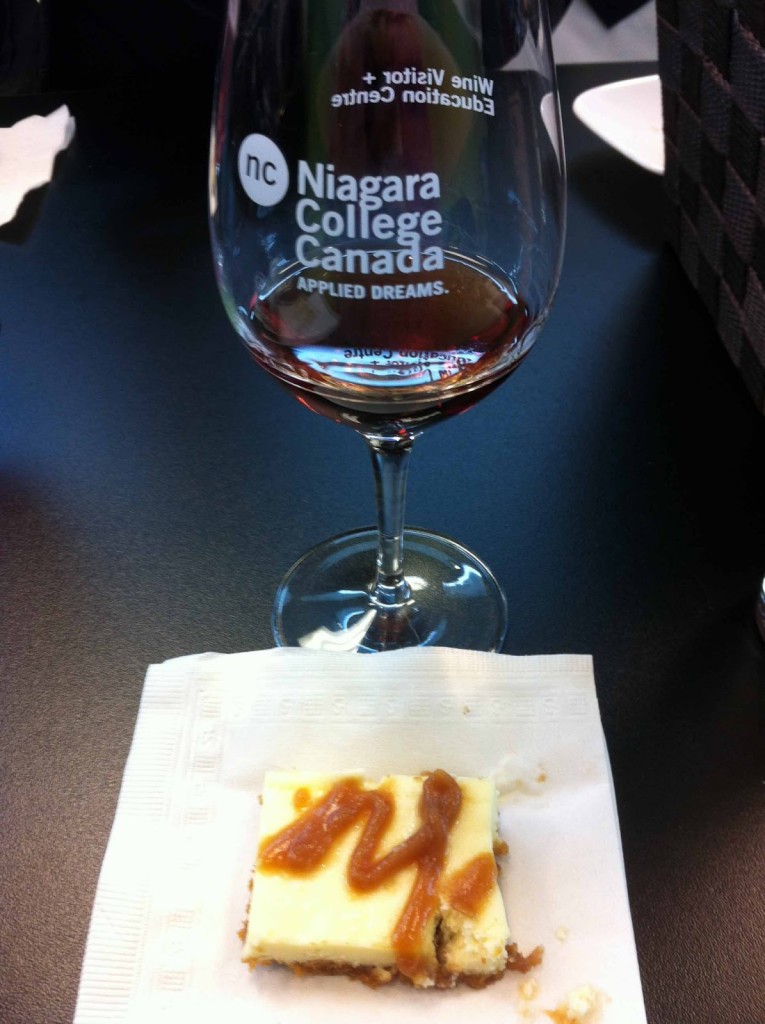 We met up with Jason and his group at the Niagara College Teaching Winery,
to sample their 2010 Cabernet Franc Icewine with a salted caramel cheesecake
bite. I love Cabernet Franc, so I was excited to try the Icewine version and it
didn’t disappoint – it was sweet and strawberry jammy. The cheesecake, which
they made with slightly more cheese to cut the sweetness a little was a good
pairing.
I really enjoyed visiting this winery – it was so inspiring
to see how many of their students have gone on to be amazing winemakers and I
like the idea of supporting student winemakers when I buy their wines (which
are pretty darn good, from what I sampled). Don’t worry, as our host joked,
you’re not drinking their homework, they learn alongside seasoned winemakers so
they get hands-on experience and what we get to drink is an impressive
selection of the best of their best. I picked up a Dean’s List 2009 Chardonnay,
which was absolutely delicious when I tasted it. 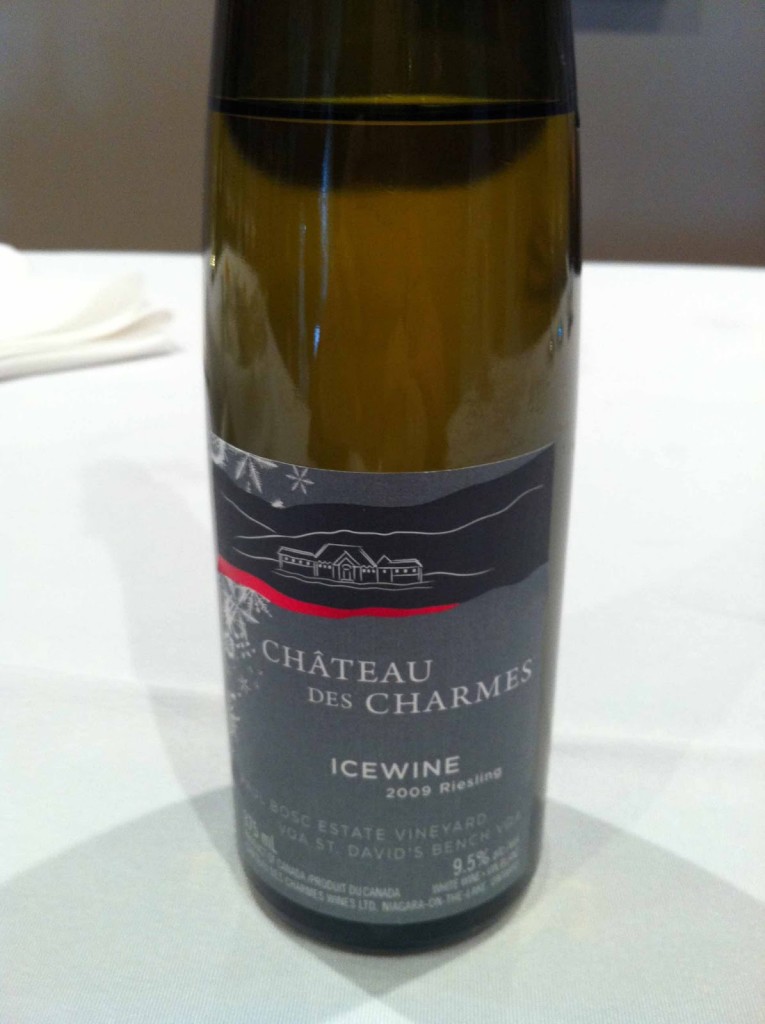 Our next stop was a personal favourite, Chateau des Charmes.
Their wines are a mainstay in our wine fridge because we just like them so very
much. We started off with a fantastic tour, which was much more fun with our
small group than the one I had with the enormous group the last time I was
there. That previous tour experience was a rookie mistake on my part – you don’t go to one of the biggest and best known wineries in Niagara-on-the-Lake
on a Saturday during harvest and expect the tour to be a small one! 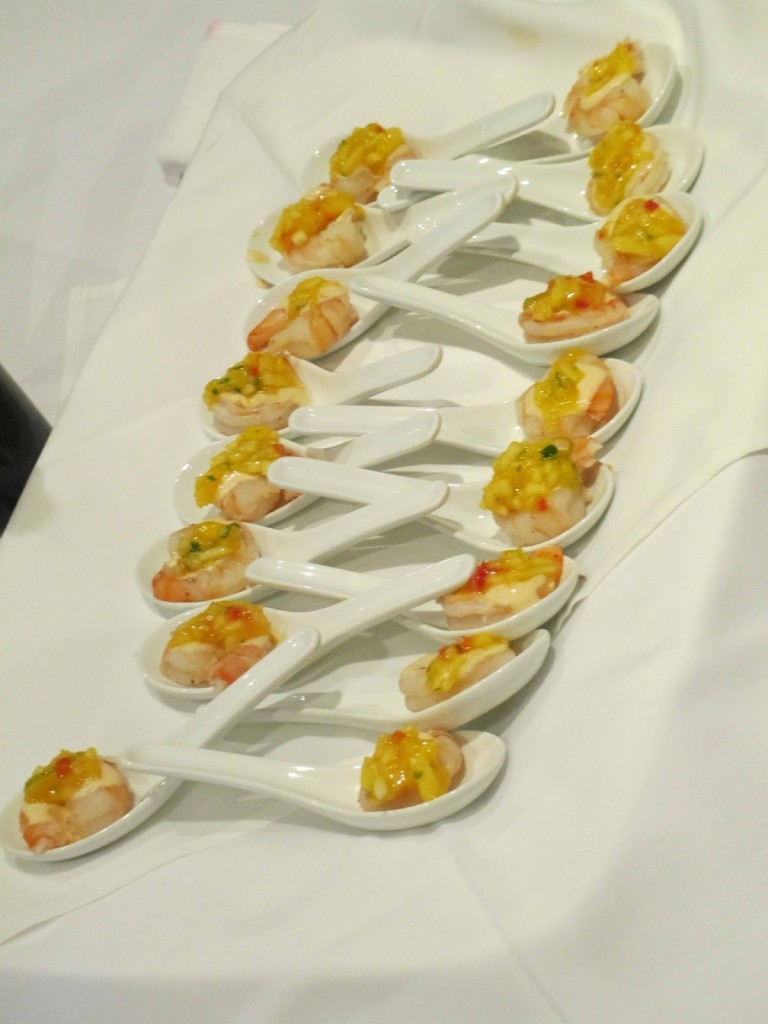 All in all, both tours there were great, but I’m glad to have had a more intimate experience with a small group. Following our tour, we did a three-wine tasting
experience (more on that in a future post) and moved on to the Icewine! We
sampled the 2009 Riesling Icewine with a lovely shrimp bite with Thai curry,
lemongrass and coconut nage made by Queens Landing’s
Executive Chef Marc Lyons. Delicious! 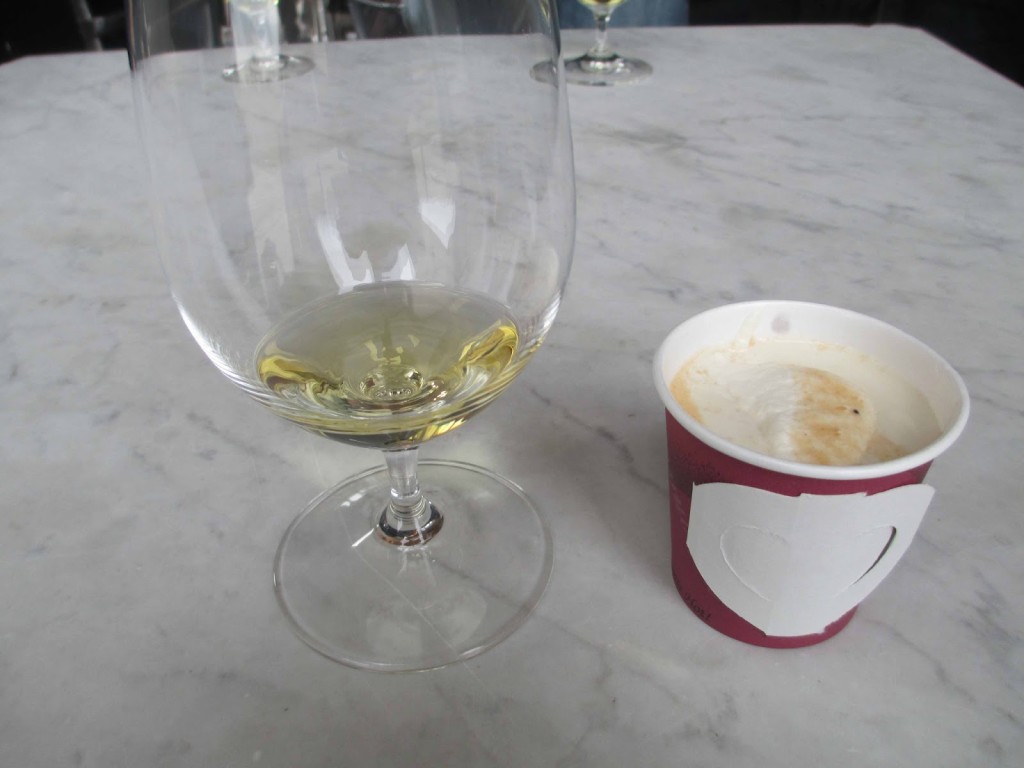 We left Chateau des Charmes (after
stocking up on a few favourites) and headed to Jackson Triggs where they were
showcasing their Vidal Icewine with house made
East Coast lobster bisque. The line here was long and I felt bad for the poor
staff who had to manage such a big crowd (especially when the bisque needed
re-stocking), but it was well worth the wait and they kept things moving and
upbeat the whole time. Their lobster bisque was incredible and it paired very
well with the super sweet Icewine. I could absolutely have eaten a big bowl of
bisque – even though I suspect it’s a pretty crazy calorie bomb!
Our last winery stop of the day was
Peller Estates, which was also the most fun and festive experience. They were
featuring Chef Jason Parsons’ Icewine Marshmallows with their 2011 Vidal Icewine
and it was an experience I’m glad we had! The marshmallows were definitely
the best thing we ate all weekend and joining dozens of others to toast them
over several of the fire pits spread out throughout Peller’s courtyard was so
much fun. Icewine and marshmallows was definitely sweet overload, but I had no
complaints. 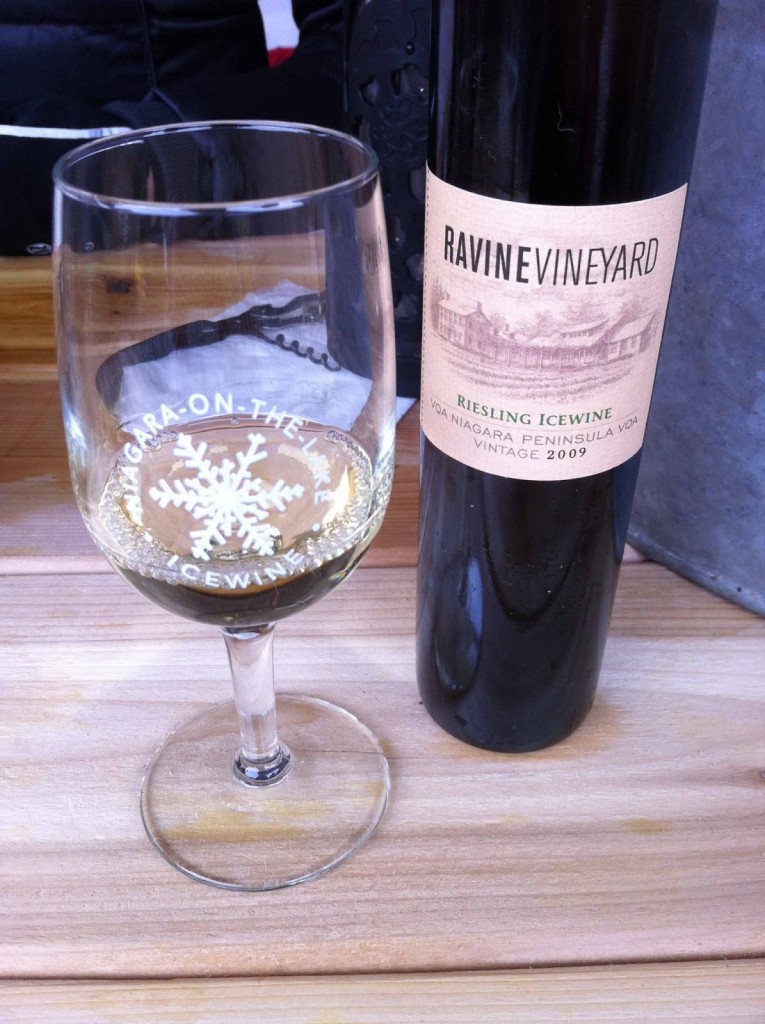 We ended the day at the Icewine Village
on Main Street
in Niagara-on-the-Lake. This was a nice experience, but I personally preferred the Discovery Pass option. If you wanted to try a lot
of the Icewines without having to drive from winery to winery, the Village is a great way to do that. Luckily for me, Shawn was willing to play DD at this year’s
fest and – even better – they included a mocktail Discovery Pass so that he could sample
all the foods and enjoy a tasty non-alcoholic beverage at each location. No, it’s not the same
as sampling a lot of lovely Icewines, but it sure is safer! Kudos to the organizers for
offering the option. 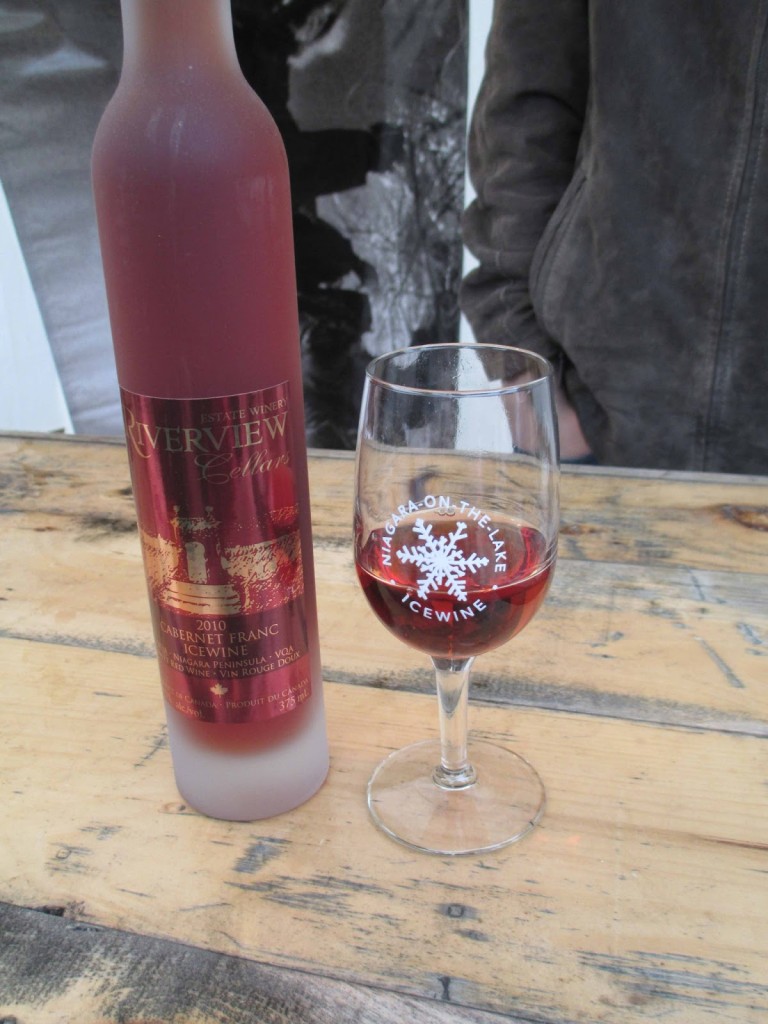 For $30 we got a tasting glass and
enough tokens for three Icewine tastings and three food tastings in the village. I was a
little Icewine’d out, so I just tried two – the sweet and sassy Ravine Vineyard
2009 Riesling Icewine and the Riverview Cellar’s 2010 Cabernet Franc Icewine,
which I thought was great – a little less sweet than some of the other options
I tried.

We took some silly pics with the
quickly melting ice sculptures and looked for some food options I could eat –
there weren’t very many. When you don’t eat red meat you’re often at a loss at
wine events and this was no exception. We did have an incredible butternut
squash soup with shrimp sample and the lovely chef from The Charles Inn
offered to make me a version of his pork and cornbread without the pork. Shawn
had it with pork and said it was fantastic – as was the venison stew and
brisket sandwich he sampled from other vendors. We will definitely be putting The Charles Inn on our list of places to eat – the
cornbread I had was divine. 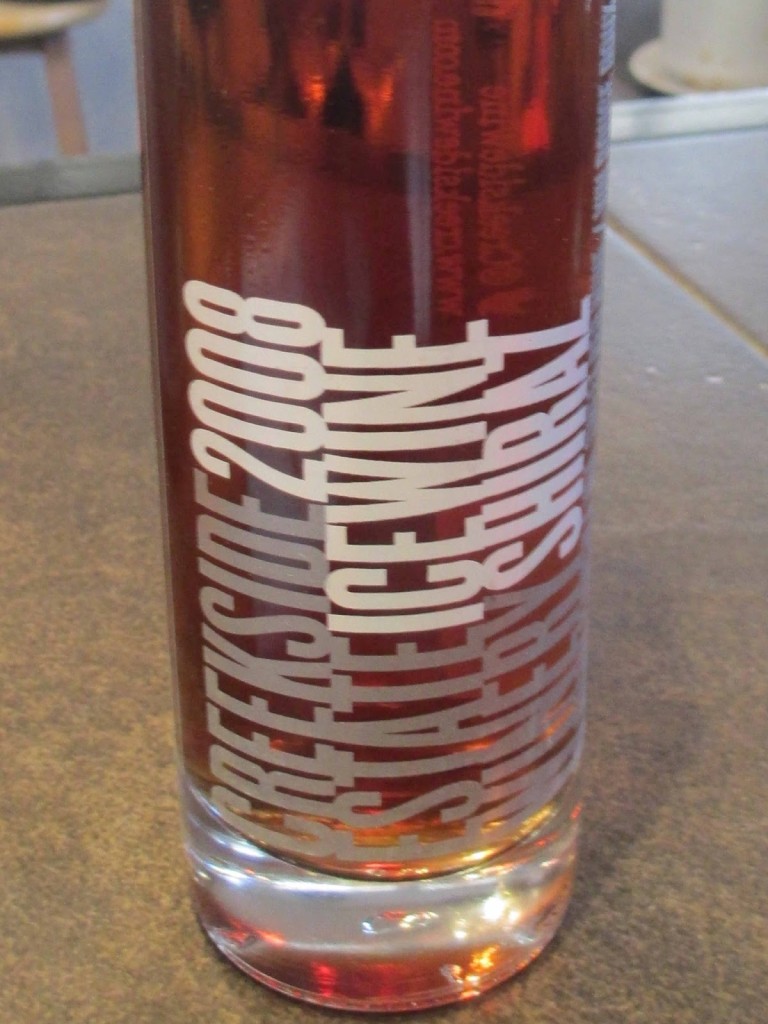 But my top pick of all the Icewine’s
I sampled was one I tried on Sunday when I visited Creekside Estate Winery. I
had heard their Shiraz Icewine was worth seeking out and I’m so glad I did –
it’s not too heavy, not too sweet and just the right amount of, well,
everything. This was the only bottle we brought home and I can’t wait to have a
dinner party so we can introduce more people to this one.
Do you have a favourite Icewine? I’d
love to hear which ones you think are worth seeking out.
For more information on the Niagara Icewine Festival, check out their site: http://www.niagarawinefestival.com/
And I encourage you to check out Jason’s blog, which highlights his picks from the Vintages release each month, among other awesome wine finds: http://vintagewinepicks.blogspot.ca/
A few more shots from the festival: