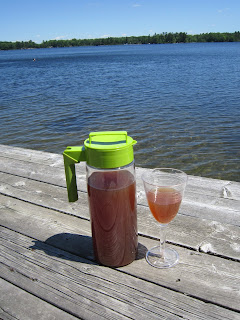 Having kicked the iced coffee addiction into high gear this summer, I’m actively trying to find alternative options that involve less caffeine, sugar and whatever else they put in those drinks. It’s working, to a degree.
One of my biggest allies in the fight has been my Takeya Flash Chiller, which I use to make brewed iced tea. I freely admit that it was an impulse purchase. Shawn was getting his hair cut and I wandered down the hall to the David’s Tea to get an iced tea. I chatted with the girl who waited on me and was fascinated by the iced tea brewing process they used. She said I could purchase one of my own – I nodded appreciatively and paid for my drink.
But the thought stuck with me. I like cold drinks and I tend to go a bit off the rails with my calories and chemicals when I vow to stick just to water. I get bored with that and end up having a diet soda or juice – not great health options. I’ve tried cutting my juice with sparkling water and just drinking sparkling water, but neither option really worked.
So when Shawn finished his haircut, I asked him to come with me to check out the Flash Chiller and see what he thought. Surprisingly, he was on board. It was $50, though, so he made me promise that I would actually use it. And I have – a lot.
These days, I brew a pitcher on the weekend to use throughout the week. I take a glass with me in the morning and then often have one in the evening. Sometimes I go through two pitchers in a week and that’s just fine too. David’s offers a range of fantastic flavours and I like the process of making tea in my chiller. We have an IKEA brew pot too, which I use for hot tea or making iced chai tea a la Oh She Glows, but I like the Takeya one best. It’s also BPA-free, which is a big bonus for me.
I even lugged it with me to the cottage this summer – and wished I had brought more tea because I ran out after just two days. Sadly, there isn’t a David’s in cottage country.
So was it worth the cost? I think so. It’s easy-to-use and easy to clean. I also like how it’s tall and thin so it doesn’t take up a lot of space in the fridge. I am willing to pay a little more for an item if it’s something that I will get value out of (and actually use). In this case my Takeya Flash Chiller fits the bill. Using David’s Tea, however, does make this a decadent purchase. I have spent more on tea in the last few months than ever before and because it takes about 20g to brew a pitcher it is a significant investment.
But I’ve decided that if paying extra for fancy tea means that I’m not putting diet soda or sugar-laden juice in my body then I’m OK with that. And I am hopeful that over time I’ll figure out what varieties I like the best and which ones are the most cost-effective, so I’ll make better purchases.
Do you brew your own iced tea? What are some of your favourites? Do you use a home brew system or just a regular tea pot?
Healthy LivingIced TeaMocktailsTea

Will Run for Wine

I Hate Running (But I Hate to Admit it)