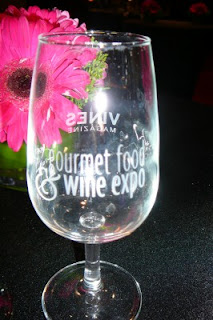 Yesterday Shawn and I decided to venture out to the Metro Convention Centre for my very first Gourmet Food and Wine Expo. I’d heard good things and was looking forward to checking it out. We had a 2 For 1 coupon from my Toronto Life coupon book and at $16 per person ($13 if you purchase online with a coupon) it was really the only way to go for a reasonable price. Once we arrived we realized that you also have to buy sample tickets to try anything (all samples are priced from $1 up, depending on their value). That meant another $20 added to the $16 for us to get in. We ended up buying another $20 sheet of tickets in the show, so it’s not cheap entertainment, but we agreed that it was worth it overall. If we had both paid the full price to get in it wouldn’t have been as reasonable, so make sure you look at deals and options if you’re planning to attend.
When you enter the event you’re given a real wine glass to use, which really impressed me. Each time you purchase a sample the vender washes out your glass first, so you don’t have to deal with a million little plastic cups. The green girl in me was super impressed with that. They also had waste receptacles throughout the event for organics, plastics and paper, which I thought was fantastic. I noticed several people were using them incorrectly, but the event was definitely trying hard to be green. 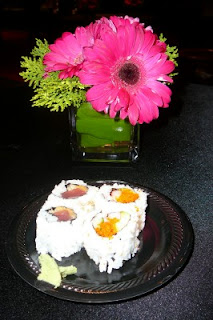 There are tons of venders at the show, including many of the best brands of wine, liquor and spirits. Shawn and I grabbed our first sample ($1 for about a quarter glass of regular white wine). It was good. Then we had some excellent sushi and decided to walk through and see what else was available before choosing our next samples. There is definitely a lot to see and it can be hard to choose, especially if you aren’t yet a wine expert!
On our walk-through I discovered the Muskoka Lakes Winery’s cranberry wine and spoke to the owner about Twitter. I thought he was the cranberry wine guy that I was following and we had a great chat. His Cranberry Blueberry wine was to die for and turned out to be my favourite of the day. I like a sweet wine and this is very much so, but not in that artificial way that so many sweet wines are. It was a very natural, clean taste. Like pure, slightly tart juice almost, but with a definite kick. I loved it and we picked up a bottle when we left the show.
When I got home I realized that it was a different cranberry wine guy that I had been following (what are the chances?), but I ended up making a new Twitter friend and discovering a great wine, so all good. Twitter was a huge help with this show because it allowed me to see what others thought and which venders they were recommending before we arrived. That was helpful when trying to determine what to try out of a huge number of options.
Once we got the feel for what was there, we had a lot of fun trying different brands. The samples are fairly small, so I wasn’t too concerned with mixing. Shawn tried several different beers and I was even talked into trying an apple beer by one vendor. I have a severe beer aversion and had heard many times that flavoured beers would change my mind, but this was actually the first one that did. I might even consider trying one again.
We both sampled several vodkas and Shawn’s favourite was Still Waters, followed by Three Olives Espresso flavour. I liked the pomegranate one by Pearl that we tried. Again, it was sweet, but not in an artificial way. We picked up a bottle of that as we were leaving too. One thing about the Expo is that you definitely end up spending on new finds too – so that adds to your total.
I was happy to see that Flourish was there. I discovered that Ontario wine at the LCBO and have been buying it recently, especially for parties. It’s a nice, lower-priced wine. I had a sample and chatted with the lovely ladies working there who were so sweet. They even gave me a flowered Flourish bag, which is so cute. I will definitely be using that.
In terms of food, there wasn’t as much as we expected, but there were good options. Besides the sushi, we had an excellent chocolate-covered strawberry, a pretty good peppermint macaroon (I think I would have preferred a different flavour) and some not so great seafood paella. There were several things we would have liked to try, but it gets pretty expensive when most food is $5 and up. We did sample quite a bit of cheese and Shawn purchased some of that.
Overall, it was a great time. We tried several new brands and learned a lot, especially about local venders. We had some fun things like an ice cream cone shot and a tiny little martini and we left feeling like we’d want to visit again, especially at a time when we weren’t watching our pennies so much. Neither of us felt drunk after all our samples, just slightly tipsy, but it’s definitely not an event you would want to drive to, so keep that in mind.
GFWEGourmet Food & Wine ExpoWine Show

The Tao of Dolly

The Tao of Dolly