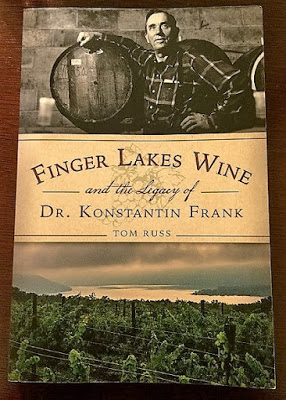 As part of our 2015 Wine Bloggers Conference welcome package, Shawn and I received copies of Finger Lakes Wine and the Legacy of Dr. Konstantin Frank by Tom Russ. This was the perfect gift for me, as I’m always interested in reading about the history of winemaking in the regions we visit. I eagerly dug into this book in the early fall and I wasn’t disappointed.

As you might expect from the title, this book concentrates solely on Dr. Konstantin Frank and his family, who were pioneers in bringing vinifera to the Finger Lakes. Dr. Frank’s legacy in the area is a big one and author Russ lays out all the reasons his acclaim is so deserved. If you’re looking for an overall history of the region’s winemaking, Evan Dawson’s brilliant Summer in a Glass may be a better bet, but this book provides a deep dive into one family’s extensive and lasting contribution to American wine.

Dr. Frank was a German man raised in the Ukraine and forced from his home during the war. A renowned agricultural scientist, he managed to grow vinifera successfully in the Ukraine’s cold climate and had re-built a comfortable life after his original displacement by running a viticultural program. When he learned that he and his family were not safe from the Soviet round-ups of German nationals, he decided he had to once again give up the life he knew. Having already lost several family members, he arranged for a friend in the Soviet army to smuggle his small family out of the Ukraine, before making their way to New York.

There, he struggled to find work (despite speaking numerous languages, English was a challenge for him),
but was determined to use his experience in agricultural science in his new country. He eventually talked the Experimental Station in Geneva into hiring him, where he quickly made waves with his assertion that vinifera could be grown successfully in the Finger Lakes. At the time, French hybrids were the only wine grapes accepted as viable in the area, but based on his experience growing vinifera in the Ukarine, Dr. Frank was adamant that it could be grown in the Finger Lakes.

Over the years, he was able to use his knowledge and experience to prove that he was indeed correct and that vinifera could grow and flourish in the region. His experiments with different grapes and growing conditions helped to inspire and educate other local winemakers and many credit his influence with the fact that vinifera is widely grown in the Finger Lakes today. But the path to this acceptance was a long and bumpy one and it certainly makes for a good read. 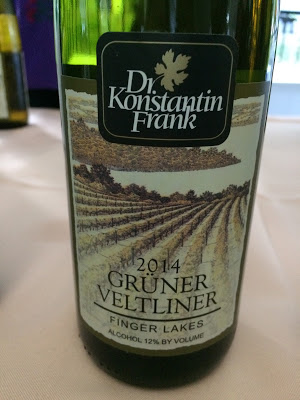 Dr. Frank’s dogged determination to see his dream of high-quality vinifera as the only wine grapes grown in the Finger Lakes was, however, not to be. While he railed against hybrids, they still make up a large and successful part of Finger Lakes wine production. But there was much more to Dr. Frank and to his company’s continued success in creating some of the best vinifera wines in New York State.

There’s lots of interesting tidbits about the region’s history in this book and it’s clear that Russ has done extensive research about the family. An enjoyable and informative read that will appeal to any wine history buff.

Have you read this book? Share your thoughts in the comments or on social.