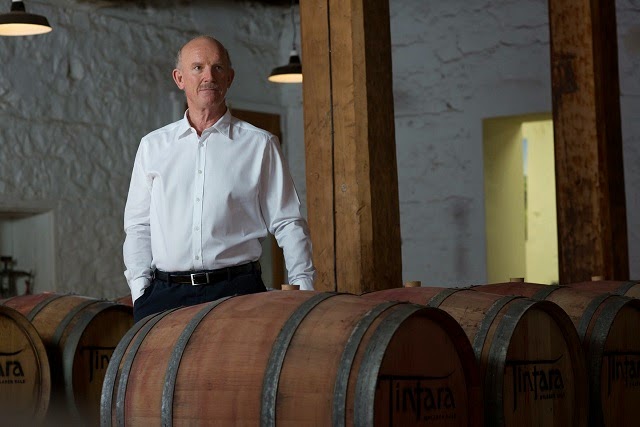 I recently had the opportunity to attend an event with Bill Hardy of Australia’s Hardys wine. Bill is the fifth generation of his family to continue the tradition of making Hardys wine, a company that was founded in 1853 by Thomas Hardy and has a long and storied history.

Bill Hardy, who trained in Bordeaux, no longer makes wine for the company and now travels the world as an ambassador for the wines, a role he is more than suited for. During our chat and his speech that evening, his passion for the wines shone through.

Hardys is a huge operation, there are 2 million glasses of Hardys wine drunk every day around the world! They have more than 50 winemakers on staff and have vineyards all over Australia. In our conversation, I asked Bill about whether, given this level of success, they experiment much with new or different styles. He said that they do and they are currently looking at working with more Spanish wines, as they see potential for those grapes in an Australian climate.

We also spoke about grapes native to Australia. While there aren’t many to speak of, he had heard about one and would love the opportunity to experiment with it. Having recently read The Wild Vine about the Norton grape, the only native vinifera in North America, I couldn’t help but be fascinated by the idea of an Australian wine grape and what that might taste like. Perhaps one day fans of Hardys will find out.

Bill spoke quite a bit in his speech about why Hardys tends to do more blends than some wineries. The company likes to find wines that really complement each other and use “the magic of tinkering” to make them special. He feels that blending two or more varieties can create a more complex wine.

For myself, I saw this to be true in Hardys Chardonnay/Semillon blend—on its own, this might be a fairly straight-forward value Chardonnay (it retails for $9.99), but the Semillon added a bit of character and made for a much more interesting wine. I’ve actually started keeping a bottle of this on hand, as it’s a very good value bottle.

The Shiraz Sangiovese was another good blend, making what Bill considers a very food-friendly wine. I’m inclined to agree and this was another popular bottle at the tasting.

If you have the opportunity, take some time to learn about the history of the Hardy family and their winery. This was such an interesting part of the evening for me—Thomas Hardy came to Australia with 20 quid in his pocket and started making wine, the winery burned down years later and they started over again. Then, in 1938, Tom Mayfield Hardy (third generation at the winery and then managing director) was killed in a plane crash and his widow, Eileen Hardy, took over running the winery. She is a fascinating woman who led a winery at a time when this was not the norm at all—and she is now the namesake of Hardys premium Eileen Hardy wines. I couldn’t find a book on this story, but I hope someone is working on one now, it would certainly make for a page-turning read.

Bill Hardy’s overwhelming passion for wine, and Australian wine in particular, is evident when you speak with him. I left the event feeling like I had learned much about the wines of the region and about the art of wine blending. An evening well spent.

Thanks to iYellow Wine Club for the opportunity to attend this event.