Will Run for Wine 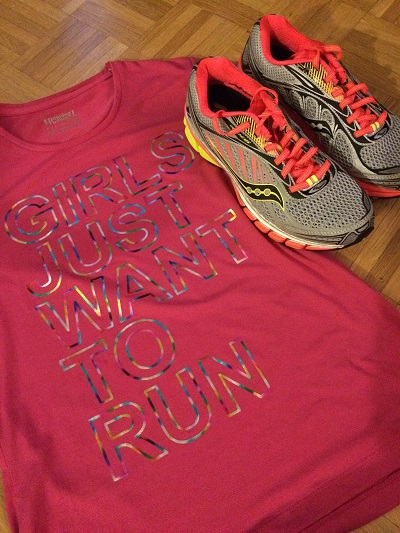 When you write about wine, you end up drinking quite a bit of it—it’s kind of inevitable. Even if you spit at tastings, you’re likely still sipping a few glasses throughout the week and those calories add up. Include all the delicious things you can pair with wine and you pretty much have the recipe for weight gain and a whole host of other potential health problems. 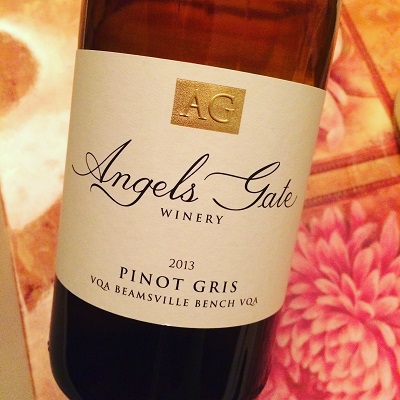 A Niagara wine worth running for.

I’ve always believed if you’re going to drink wine or indulge in anything decadent, you have to take care of your body in other ways. I’ve chosen moderation in alcohol consumption (in so much as that’s possible when you write about wine) and cutting down on refined sugars (wine is sweet enough). I also exercise—a lot. If you follow me regularly on social media, you may have seen my #winetax tweets or one of my many, many running posts.

Running has changed my life. When I started, I hated it and thought I would make it through my first 5K race and go right back to the yoga and strength training programs I liked. But after running that first race, I signed up for another right away and I’ve run dozens more since the one I swore would be my first and last. Running has become my happy place—it’s where I think about new blog posts, work through issues or listen to podcasts. It’s been so good for my body and soul.

Then late last year, I suffered my first running injury and had to take a break. I started going to an amazing Yoga for Runners class, took up Pilates and went to dance classes, but mostly I thought about how much I missed running. I also started to wonder how much my wine writing was tied to it. I had always looked at running  as a way to compensate for those extra calories, but also as a great space to think—many a blog post or review has been written in my head during a run. I worried that my forced break would have an adverse affect on my blogging.

I’m far from the only wine scribe who runs, two of the wine writers I most admire, James Molesworth, Senior Editor for Wine Spectator Magazine, and John Szabo, Master Sommelier and Principal Critic for WineAlign.com, are both avid runners.

Like me, James sees running as a way to work off the excesses of this industry, “I run because it’s basically the easiest exercise possible—you don’t need a gym and it doesn’t matter where you are. Just bring your sneakers,” he says. “Though everyone is different, I find it one of the most effective exercises for shedding pounds, upping the metabolism and boosting energy—all of which are necessary when dealing with the vagaries of restaurant meals, jet lag and an above average level of wine consumption that is typical for our industry. I’m not sure how it’s affected my writing directly, other than to say feeling good physically makes work easier and more enjoyable.” 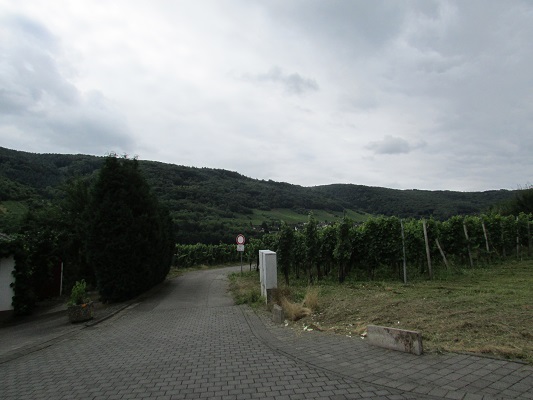 I’m looking so forward to running in the Mosel soon.

James often posts about his runs on Instagram, which is especially inspiring when he runs through wine regions. “I’ve been lucky to get to a number of wine regions,” says James. “I’ve run through and around vineyards in Bordeaux, Sonoma, the Rhone Valley, South Africa and elsewhere. If there was one that stood out though, it’d be a trail run I made with a friend through the Jonkershoek Valley in South Africa’s Stellenbosch area back in 2013. It was difficult yet exhilarating—and it was just the kind of thing I would have thought crazy or impossible before I started running in earnest a few years ago.”

I hope to be recovered enough to run through the Mosel and California on my own wine adventures this summer, something I would have thought impossible myself not that long ago. I can only imagine the wine stories I’ll write in my head on days when I can run in such close proximity to the vines.

For John Szabo, running fits neatly into the life of a wine writer. “Physical activity is as much a part of my life as wine. Hardly a day goes by without both, it’s a natural and necessary as breathing. Running is perfect; whenever I have an hour, I throw on my shoes and go,” he says. “There’s no schedule, no special equipment, no parking, no restrictions to worry about. It’s complete freedom to find that critical balance in my life.” 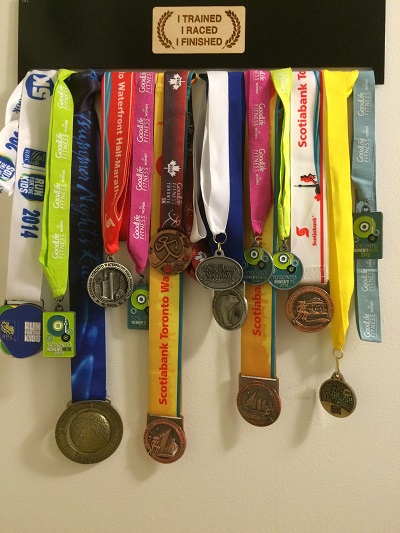 Racing burns calories and allows you to show off some pretty sweet bling.

I’ve slowly been making my way back to running over the last few months and have even run two really strong races since my return (I credit Yoga for Runners). I also find I’m more inspired to write since I have those long stretches to think and plan. Maybe not all runners think about winemaker interviews or Vidal reviews while they’re racking up the miles, but I can’t imagine running without wine on my mind.

If you’re interested in starting to run, there are lots of great training programs available—and maybe a run through wine country would entice you into getting started. In Ontario, Prince Edward County’s Terroir Run (where John has placed third in the past) is an intimate 10K run with just 100 participants. “We think that running and wine go well together,” says organizer Rebecca LeHeup of this May race. “It’s a great way to experience ‘sense of place.’” At the end of your run, you can enjoy local wine and a County meal, both well worth using the extra calories burned towards. Hurry—this year’s race is almost sold out!

In Niagara, the Beamsville Bench 5K and Run for the Grapes Half Marathon and 5K are part of the Subaru of Hamilton and Niagara Running Series. The Beamville 5K, on Saturday, July 16, starts and ends at Mike Weir Winery with lots of wine country running in between—and wine at the end, of course. On September 25, the Run for the Grapes takes place during the Niagara Wine Festival and involves running through local orchards.

Thanks to James and John for sharing their experiences! Read more of James Molesworth in Wine Spectator Magazine. You can read John Szabo’s work in several places, including WineAlign.com, or pick up his book, Pairing Food and Wine for Dummies.

How do you pay your #winetax? How do you stay healthy while maintaining your love of wine and the great food that goes with it? Share your thoughts in the comments and on social.

Vintage – A Novel by David Baker 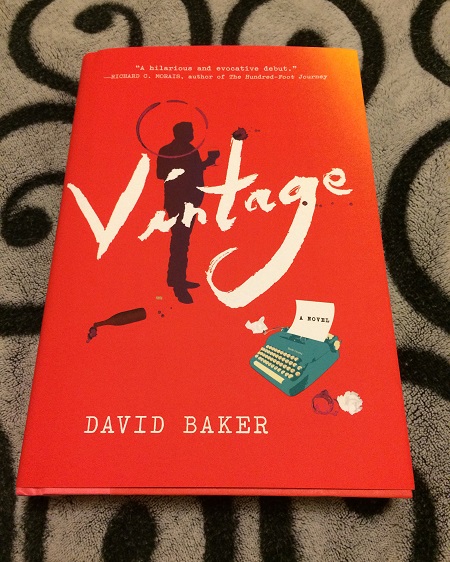 I confess that for the first part of Vintage by David Baker, I really didn’t like Bruno Tannenbaum, the main character in this novel. A washed-up wine writer and food critic who drinks too much, has been kicked out by his wife for his philandering and now lives on his mother’s couch, it was hard to see the good in Bruno. During the first few chapters, his drinking and bad behaviour infuse every ounce of this book. And when, after losing his prestigious newspaper job, he takes on a friend’s assignment to catalogue his wine collection – then goes to help himself to a 1963 Chateau d’Yquem – I actually had to put the book down for a few days. Apparently, I am tortured by the thought of someone opening a vintage d’Yquem for the wrong reasons.

But it turns out this moment is the one that kicks off the real story in the book. Bruno ends up on a wild, wine adventure that takes him all across Europe in search of the story for his next great book. As he researches wine history while looking for a mysterious missing vintage that may have been hidden by the Nazis, Bruno drinks too much great wine, eats too much fabulous food and uses his odd charm to make friends and ferret out clues.

Bruno’s quest is a dangerous one—he’s not the only person pursing this wine and some of the others are not afraid to use force to get it—but for Bruno it is clearly a turning point in his life. He wants to be a better father, possibly a better husband (his love life remains a bit of a muddle), and he desperately wants to regain his stature as a great writer. His research trip is clearly also about pulling together the broken pieces of his life and figuring out what still fits.

So in the end, I came to enjoy Bruno much more than I did at the start. He wormed his way into my heart in the same way he charmed so many on his trip through Europe. While I certainly didn’t approve of (or often understand) his choices, I could relate to the internal crisis he was facing and how he was looking for redemption.

While this is a work of fiction, lovers of fine wine and food and European wine history will want to check out Vintage. David Baker, who made the documentary American Wine Story, has a passion for wine and food that emerges on every page. Each chapter of Vintage starts with an excerpt from Bruno’s fictional wine and food writing that celebrates the ability of cuisine to bring people together, to heal the soul and to transform lives. These short vignettes help you better understand Bruno the character, but I think they also tell you a bit about the author and why he is so passionate about these things too.

Vintage is a fun and quick read (especially if you don’t have to take a break after the d’Yquem like I did), It’s perfect for your next vacation read (in particular if you’re spending it in a wine region) or just as a lazy weekend page-turner.

Have you read Vintage? Do you have a favourite wine-based novel? Share your thoughts in the comments or on social.

Love wine-related fiction? Me too! Check out my review of Cathy Ace’s The Corpse with the Golden Nose (set in B.C. wine country) to learn about another great read.

*I received a review copy of this book, but all opinions are my own.