Love, Loss and What We Ate by Padma Lakshmi 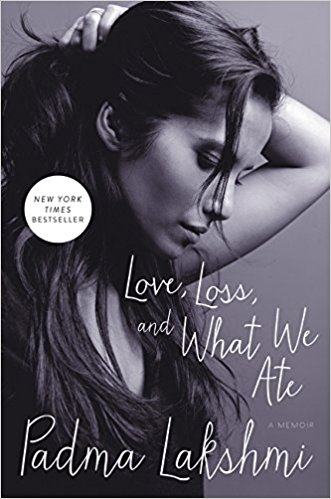 I am someone with a serious case of book FOMO. The ‘to read’ pile next to my bed has come to resemble a tower and I suspect Shawn will question my spending habits if and when he realizes I’ve  managed to acquire almost 500 books on my Kobo app, a number which far outstrips my ability to read them even without the aforementioned tower getting in the way. Because of this backlog, I’m often reading bestsellers well past their release dates. Such is the case with Padma Lakshmi’s Love, Loss and What We Ate: A Memoir, which I couldn’t resist at a recent Kobo sale.

I’m familiar with Lakshmi from her job on Top Chef, which Shawn watches religiously and I only recently started paying attention to as well. Cooking shows are one of the few things we can both agree on and Top Chef is a slightly more mature version of the game shows The Food Network favours. I had also read some of the tabloid stuff – married and divorced from Salman Rushdie, had a baby with Adam Dell while in a relationship with another man – you know, that juicy stuff that leads to a guilty pleasure read.

So why write a review for Upkeep, as this is definitely not a wine related read (unless you count the part where she confesses to having the occasional glass late in her pregnancy, but I’ll just park that discussion because, well, it’s always an ugly one)? This book is part memoir and part cookbook and it reminded me so much of the way that food integrates into the complexities of our lives.

These days, as I juggle my many projects, a new job, and a chronic illness, food has taken on a new place in my world. It is the comfort I seek when I’m beyond exhausted and I just want one of Shawn’s delicious chicken burgers, or my sustenance when I meet up for the many lunches I have with friends since my nights are rarely free. It is something I both want and need, but struggle to find balance with.

Lakshmi’s life is far more interesting than mine. She chronicles her childhood growing up split between India and America, her marriage to Salman Rushdie, her career development from model to cookbook author to Top Chef host, her struggles with endometriosis, her miracle baby and the custody battle that follows, as well as the devastating death of the man she loved. All of this is intertwined with the food she ate and the important role it played in her life.

Reading the reviews on GoodReads, it’s clear this book is not going to appeal to everyone. In fact, several people seemed put off by Lakshmi. I can understand this to a degree, especially during the period when she is dating two men and causing both of them anguish. I also didn’t love how she dealt with her custody issues. But I liked that she was OK with not always looking or sounding perfect (I’m definitely not) and I found myself really enjoying this book overall and the human behind it.

This is an older book and much has changed in Padma Lakshmi’s life since it was written. That said, it held up well, and I’m interested in trying out some of the recipes (it could happen – you never know). It was also a reminder that maybe my obsession with food isn’t such a bad thing, perhaps it’s even fueling my art.

Have you read Love, Loss and What We Ate? What did you think? Do you have a favourite food-themed memoir? Share it in the comments or on social.